Another speech by Cameron

Cameron did it again. Another speech, where the British PM think he has the right to blackmail the people of Europe.
As a European I refuse to be quiet and let a national leader threaten us to take our rights away.
Cameron needs to turn his focus to the British debate about the British future because when Europe reform we reform together and it will happen on a mandate from the European people, not from one or two nation-states or leaders. 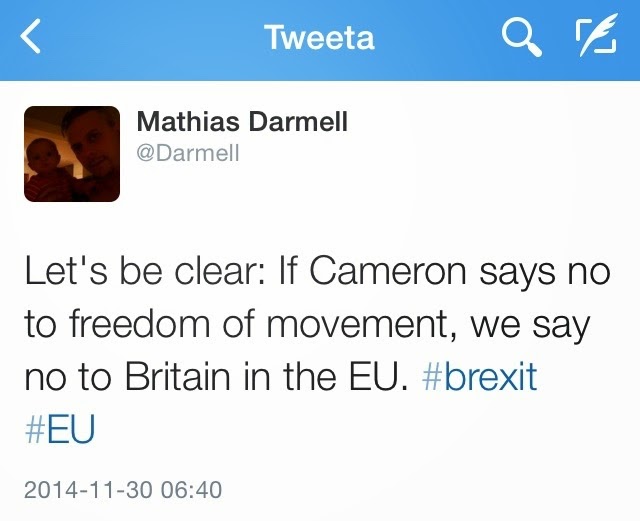 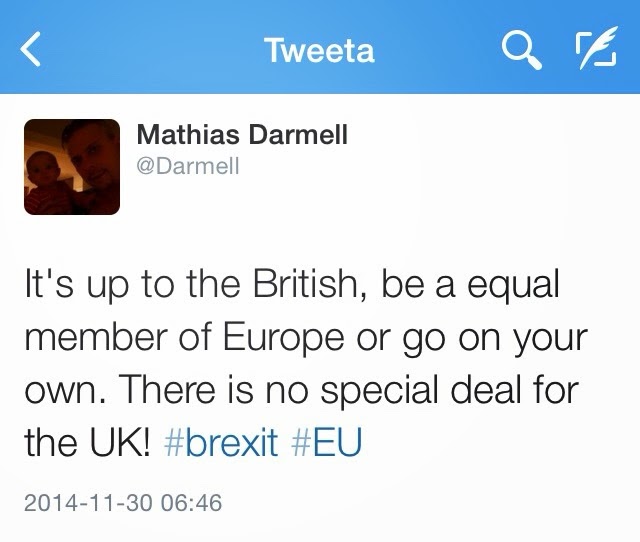 Creating a populistic problem out of possibilities

The war against freedom of movement and "EU migrants" (citizens) that is led by David Cameron is a perfect exempel on how to make liberties and possibilities for all of us into a problem in national politics with the simple purpose to score short-term political points.
The British PM is hiding behind the need for EU reforms to dismantle the very core of principles of the people's union when in fact the focus on EU reforms needs to be to strengthen democracy and citizens participation on EU level. Cameron wants to close doors that has been opened for citizens participation instead of open all the doors that needs to be opened.

Tweets on the move about nationalists 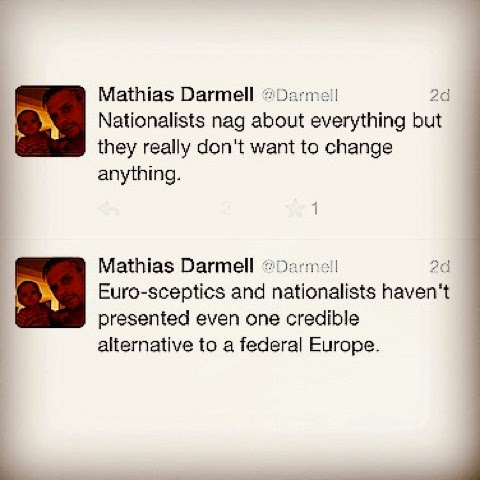 When something is wrong in Europe, anywhere in Europe the EU functions as the perfect scapegoat for national governments and politicians. We the voters are very quick in our great ignorance to follow. It can be about a single country's mismanaged economy, another country's corruption, poverty or, ironically a country's widespread nationalism.
The EU can be and has been a counterforce against all the above but is limited by nations that do not want to give the EU the needed transparency and control.

The EU is removing barriers and creating opportunities for common people, one example is the freedom of movement that simplifies and enables us to travel, study, work or settle within EU borders.
The free movement is frequently attacked by national politicians and nationalist movements.

The EU is in its nature a counterforce against the nationalist winds and against intolerance but the policy implemented within the Union are governed by the same governments who then blame their mistakes on the EU. A very strange and a rather bizarre situation.

Against this background, the EU must be democratised and reformed. But it can not be done if we the citizens don't understand the current systematics and the true purpose of the Union and of European integration
( unity in diversity ).
In the longer term, the schools has a huge responsibility in educating future voters but in the short term, we must demand more from politicians and institutions.

Today's Europe is sluggish, tired, and has a democratic deficit, but the EU is not to blame!

A democratic and federal Europe is the only thing that can grant Europeans independence and sovereignty at both local, regional and at a European level in the modern world 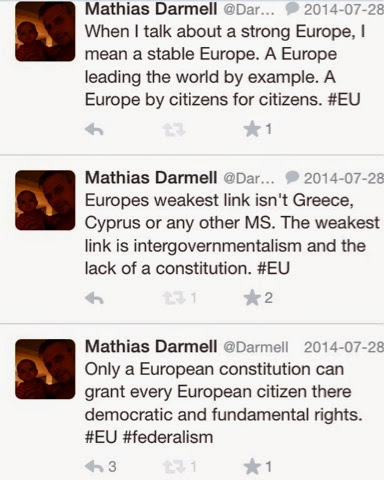 The best way to govern Europe is with a democratic federal system that is based upon a European constitution that not only guarantees democracy at a European level but at all levels of gouverment. This is the reform that the entire union and its states need. 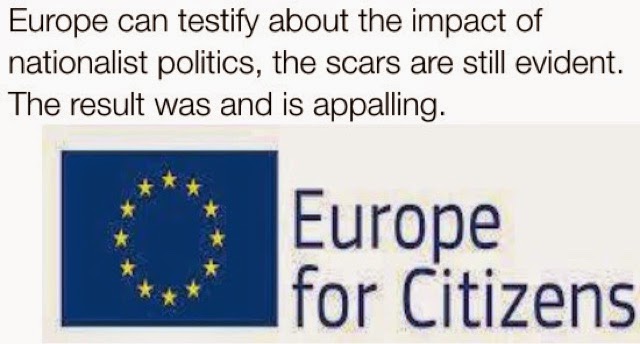 Stop calling EU citizens for "migrants" and "immigrants" when they move within the union! We are all European citizens! 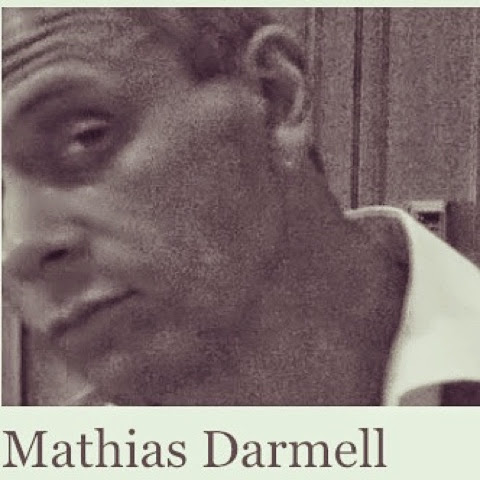 Email ThisBlogThis!Share to TwitterShare to FacebookShare to Pinterest
Labels: democracy

A celebration under dark clouds

Today is the 25th anniversary of the fall of Communism and the wall that divided  Europe and the world.
I was 13 years old when I saw people with simple tools and bare hands, not only trying but actually tearing down the wall that captivated millions of Europeans in the grip of communism. What I saw in Berlin together with the fight for indipendence in the Baltic States and the struggle for liberation in Poland and in Romania helped shape my liberal and humanist values ​​that are such a big part of who I am.

In the 25 years that have past, democracy have grown strong roots in most eastern European states that used to be imprisoned by a communist dictatorship. Fast EU membership has integrated Europeans after decades of division by imaginary borders and walls. The economic and social development has followed and despite the financial crisis the integrated Europe have created the world's largest economy and social safety nets.

Unfortunately, the reactionaries and populists on both the right and left wing have taken a new grip on the people of Europe and they are doing what they can to strengthen internal borders, build new walls and divide Europe once again.

Another step towards a better Europe 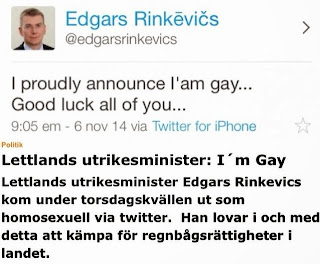 Viviane Reding is taking a stand for citizen rights

More politicians must fallow in Viviane Redings footsteps. Take action and demand that our leaders stand up for our   rights. 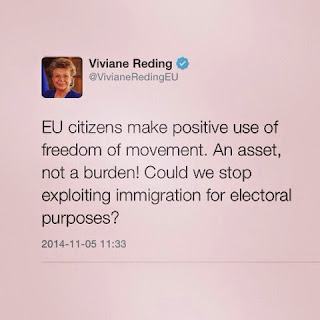 I fully support Chancellor Merkel in defending our freedom of movement against back stabbing Cameron who is trying to tear every part of the people's Union into shreds. Cameron keeps attacking the soul of European integration and solidarity. Everything that's dear to ordinary people. We must stop him!

It's not that complicated. All identities that you carry are as real and genuine as the other. 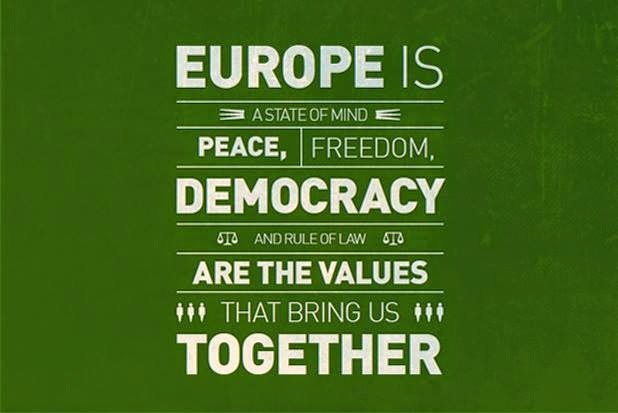